only make believe I love you: Partenope at San Francisco Opera 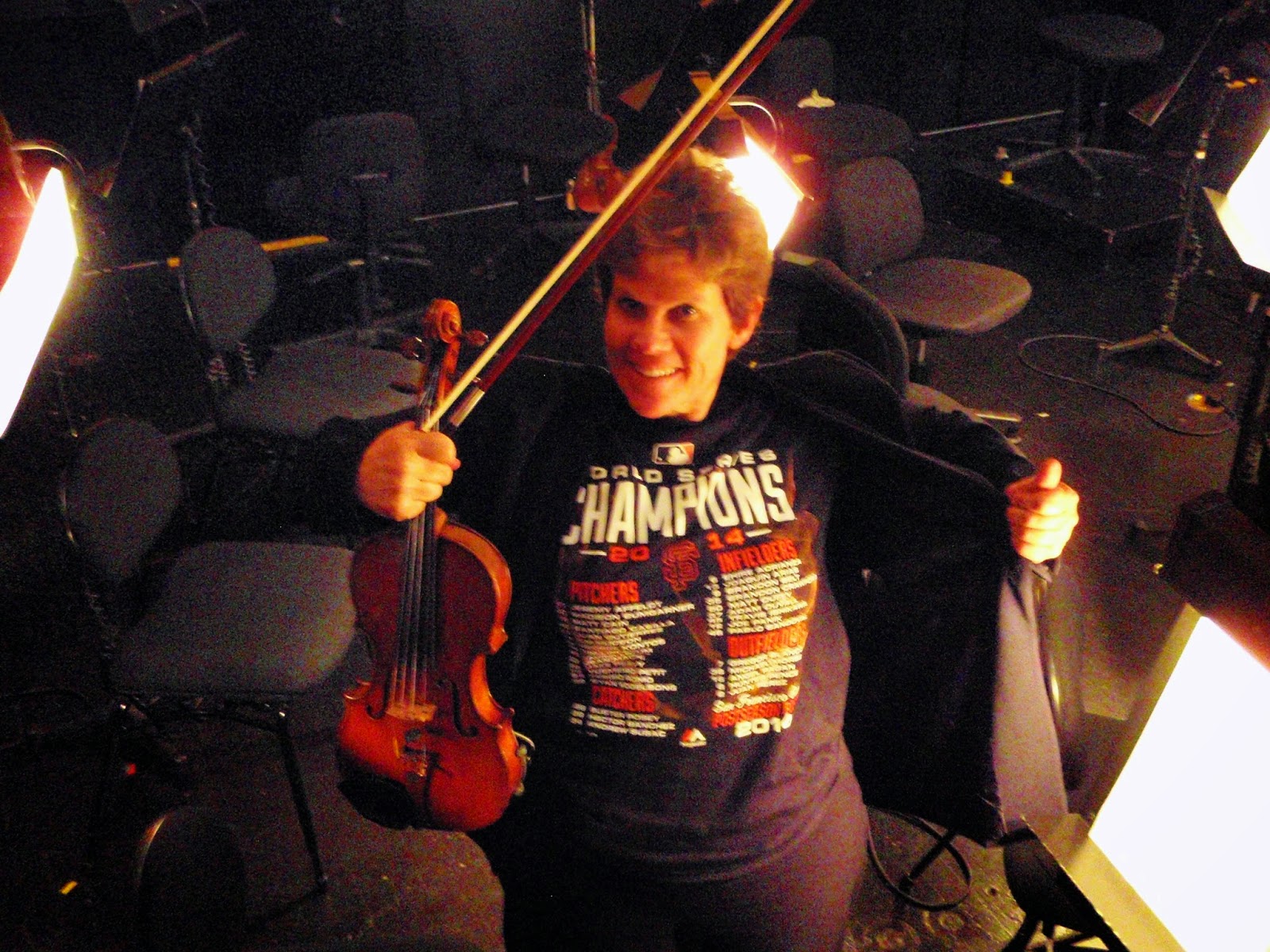 On Thursday I was at the fifth of the six San Francisco Opera performances of Handel's Partenope. Partenope is the Queen of Someplace, with four other princes or something all swirling around her, each saying, with varying degrees of sincerity, that he's in love with her (although one of them is actually a woman in disguise, hunting down her former lover, who is now in Partenope's posse). There's also a charming gay best friend. They buzz around for three and a half hours until things all shake out. Director Christopher Alden had the inspired idea of setting this work in the surrealist milieu of 1920s Paris, an era with a lot of potential to connect with this opera's playful, unsettling, gender-bending frivolity and absurdity (in the sense of Theater of the Absurd, not in the "isn't this silly" sense). Unfortunately a lot of his specific staging did not live up to the inspiration of the original idea. I kept feeling that I should be enjoying myself a lot more than I actually was.

I'm not talking about staging that is obviously different from the original action – for example, there are some battle skirmishes, which here are staged as period-appropriate dances (the period being the 1920s) in which people change partners, cut in, and cut out. I thought that was witty and astute. There are other nice touches, like having Partenope straddle a chair à la Dietrich in The Blue Angel; or the visual leitmotif of bananas, which have an obvious phallic connection with the surrealist dreamworld (and are maybe also a reference to Josephine Baker's notorious banana costume?). There are a few striking visual references, such as a spiked German helmet and gas masks, to the First World War, which of course would still have been much on the minds of everyone in 1920s Paris. (The staging could have emphasized this element more; it would have given a strong and poignant shadow to the action.) But for every clever or striking moment, there were too many in which the action seemed generic. 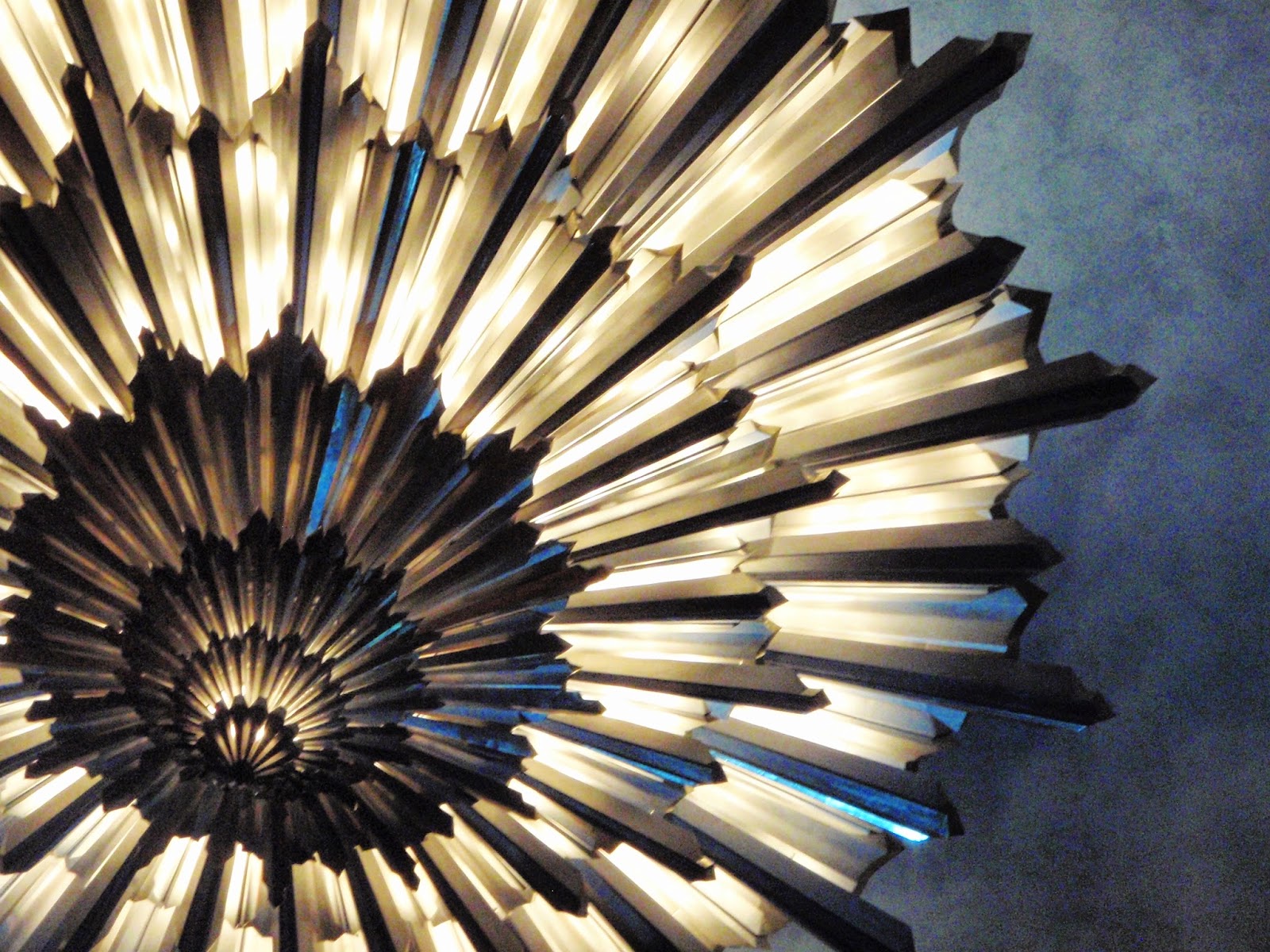 What I'm complaining about are things like: "I am singing an angry aria, so I will walk around this room smashing things at random and writing on the walls," with its variant "I am angry so I will overturn some chairs"; or "I am singing an erotically charged aria, so I will now hump this chair, in case anyone is missing the point" or "I will now lie down on the floor to sing, because this opera is very long and I need a rest and someone has overturned or humped all the chairs." For me the low point was Act 2, most of which is centered around a toilet – and just saying that makes it sound more shocking and épater la bourgeoisie than it actually is, and complaining about it makes people think you're being stuffy and prissy, but that's not really it. I'm not offended by the sight of a toilet – I use one regularly myself – I don't find it unsuitable for the stage and so forth. It would work better for me if I did. Bodies make noises, people need to use toilets, we all know this, I don't find it either funny or offensive. So we get bits like Partenope stepping into the bathroom and then one of the lovers starts singing about how wonderful she is and then he says he hears her and that's when the toilet flushes. I have to blame Handel for not including the appropriate rim-shot in the score. Various characters also get shoved into the bathroom, or spend a lot of time unrolling toilet paper. Again, this struck me as pretty standard stuff. I should say that many of those around me found the mere sight of a toilet hilarious.

And for some inexplicable reason, the characters are constantly lighting pipes and cigarettes. They don't actually smoke them, outside of a puff or two; they just keep lighting them. The smoking makes them look trashy and not very bright, like high school students trying to look cool. This directorial tic is especially odd since the main reason to have performers smoke on stage, which is that they're not very good and need something distracting to do with their hands, really doesn't apply here. All of the performers are adept and know how to hold the stage physically as well as vocally. But even when the singers were breaking through into genuine emotion the staging kept undercutting them with standard-issue hijinks. (When Peter Sellars staged baroque operas, he knew when to pull back from the wacky and illuminate moments of emotional truth.) Even actions that might have been strange and beautiful in the surrealist way, like the shadow play during one of the arias (maybe I'm particularly susceptible to shadows), get laughed at because the staging has framed everything so that the audience is cued to see the characters as ridiculous and their actions as a generic vaudeville. Three-and-a-half hours is a long time to spend with characters who are denied emotional depth.

Partenope was sung by Danielle de Niese. This was my first time hearing her live. I know lots of people run hot and cold on her (I know at least one person who loved her so much in whatever opera he saw her in that he went to a recital she gave a week later and he hated her in that). She started off a bit roughly, with a kind of reedy quality in her voice that was sometimes acidulous but mostly not unpleasant; she bloomed later on, particularly in one of the arias towards the end of the second act in which she sings about what a butterfly she is. This really brought out her lissome charms. I think it was during that aria that the audience started applauding even though she was clearly not finished. Pay attention, people! As probably everyone who follows opera knows by now, de Niese is strikingly beautiful, and here looked like an Art Deco sculpture brought to life. It's a visually pleasing cast. 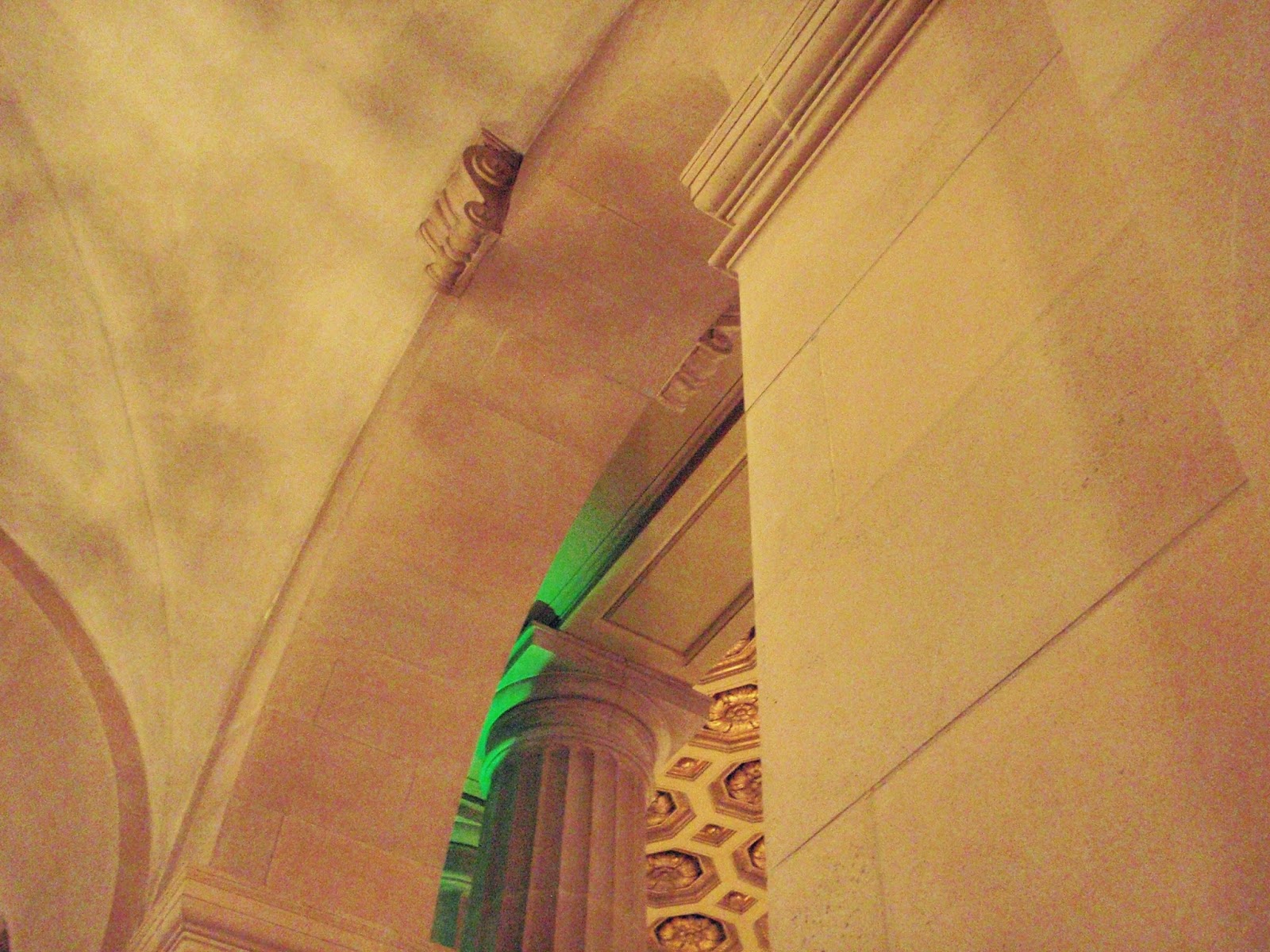 Her main suitors were countertenors David Daniels (as Arsace) and Anthony Roth Costanzo (as Armindo). Daniels was in good form, but for some reason I wasn't quite connecting with the emotions of his character until towards the end. This may well be my fault; there's a lot that goes on (even at a chemical/physiological level) in receiving a performance. I was tired and a sort of emotional hangover from the World Series seemed to pervade the city on Thursday, even though the Giants won. Costanzo's voice is a bit more blanched than that of Daniels, but that suited his character, who is rather mopey. Costanzo himself got some of the more striking and effective moments, as when he sang a forlorn aria hanging off the sweeping circular staircase in the first act, or his delightful tap-dance, dressed in pajamas and a Max Linder-like top hat and cane, when (uh, spoiler alert?) he gets the girl at the end.

Bass-baritone Philippe Sly as Ormonte had a dandyish mustache and a luxuriously wavy beard; he gets one aria, which Sly delivered beautifully. Ormonte is played, fairly subtly at first, as gay; then at the end there's a duel, and he's supposed to be the judge, and (possibly because he's representing Partenope? or just for the hell of it?) he comes out in an elaborate and, I have to say, fairly unflattering gown. Something in a slimmer cut would have suited the youthful Sly and been more practical for judging a combat. It's sort of amusing that the gay character has the deepest voice among the men. (The duel, which ends up not happening, made me think you could also stage this opera as a sort of Chekhovian rueful yet acidic comedy).

For me the two most consistently interesting and pleasing vocalists of the evening were mezzo-soprano Daniela Mack (as Rosmira, in male disguise as Eurimene, to find Arsace, who betrayed her love), who brought real urgency to her suffering, and tenor Alek Shrader as Emilio, who is . . . well, some guy who invades Partenope's country because he's in love with her? Dude, next time try a box of nice chocolates. It's kind of a confusing role – Emilio just seems to be hanging around after losing the battle – but Shrader brought beautiful even tone and depth of feeling to his arias, one of which he managed to sing while striking yoga poses. The conductor, Julian Wachner, kept things moving along nicely. The elderly couple next to me commented, "He's so serious." I wasn't quite sure what they meant until they compared him to Philharmonia Baroque's Nicholas McGegan, who is indeed a bouncier type. But I thought this music benefited from a certain sobriety. I always like seeing a theorbo sticking up out of the orchestra pit, and tricky instruments like the baroque horns were handled with aplomb. Special mention should go to set designer Andrew Lieberman, costume designer Jon Morrell, and lighting designer Adam Silverman, each of whom did some outstanding work. 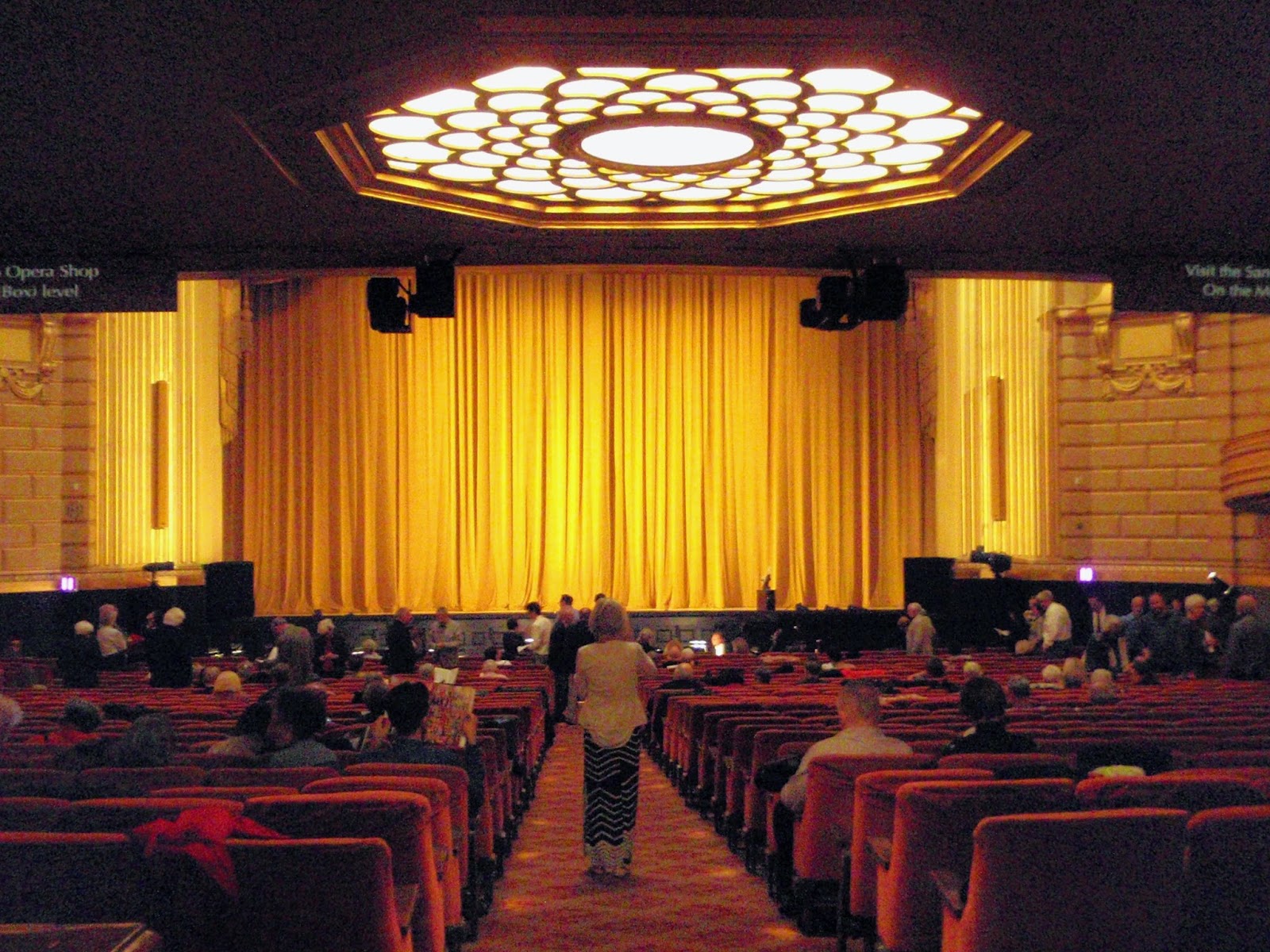 Thank you for confirming my impression about the direction by Alden. Once the pleasure of the gorgeous physical production wore off, it was one "wacky" moment after another that bored the bejesus out of me. I found myself closing my eyes a lot to listen to the fine orchestra and singers.

Was supposed to be there that night, could not be for tedious reasons, but your review makes me truly wish I had been in the house. Not because I feel I missed a great performance (I am missing great performances of this, that, or the other thing every day of my life. I have become resigned.), but because a review that can make me laugh out loud over a show I did not see would surely be even funnier had I the images in my head to go with it. Kudos, and HUGE thanks for a very, very hearty laugh (and several wicked sniggers).

I have to say: the performers were strong enough, and the opera entertaining enough, to make me wish the direction had been more consistently strong. That's my way of saying that I don't regret having seen it, and I think you might not have either, only . . . I was expecting something more.

For now that wraps up my fall season at SF Opera (write-ups of Ballo and Norma still to come, soon I hope), though I'm thinking of seeing Cenerentola now that Efrain Solis is in the cast.