O Internet, I love you so!

One of my favorite professors at Cal (though she moved on before I graduated) was Professor Margaret Anne Doody, from whom I had two classes in mostly eighteenth-century English literature: one was a survey course that started with Milton and went to the edge of the Romantic movement, and the other was a course in the English novel from Defoe to Austen. About two-thirds of the way through the quarter she asked each of us in the novel class to say which was our favorite so far. I felt, once again, incurably boring and wishy-washy, because everyone had strong opinions and I had none, I had enjoyed them all equally. I was trying to express general love and excitement at discovering the richness and strangeness of the period, but I was conscious that I just sounded feeble. (It occurs to me now that the rest of the class probably assumed I hadn't read any of the novels.)

That was before the next book on the syllabus, which would have provided me with a clear favorite: Fanny Burney's Evelina. Professor Doody was an expert on Burney as well as on Samuel Richardson (it was thanks to her lectures on Pamela that I spent my Christmas break reading Clarissa, and finding the unabridged four-volume Everyman edition of that novel still counts as one of my greatest finds at Moe's Used Books).

Anyway, I loved Evelina, and spent years searching, mostly in vain, for Burney's other novels: Cecilia, Camilla, and The Wanderer. (In case you're wondering, this was long before the Internet or Kindles; if you wanted an out-of-print book, you had to hope it would show up in a used book store.) Burney gets compared to Austen (who greatly admired her predecessor), but that's mostly because they're both women who wrote at roughly the same period, and because most people have only read Evelina, which is indeed like a more rambunctious Austen novel. 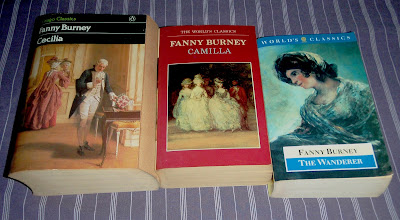 Eventually I found copies of the elusive three (pictured above). Two of them are from the Oxford World's Classics series, which also published Richardson's Sir Charles Grandison around that time, so the 1980s, in retrospect, were good for at least one thing: finding copies of hitherto unavailable eighteenth-century English novels. I think several of these have since been allowed to go out of print, but of course it's much easier to find used books these days, what with the aforementioned Internet and Kindle-type products. At some point I sold or otherwise disposed of my copy of Evelina, which had a truly clunky and hideous 1970s cover. But that's always been the Burney novel that's easiest to find. Anyway, after finding and reading the other three novels (though so long ago I should probably re-read them), I can tell you Burney is actually more like Dickens: she has that kind of vast social range and ambition, and that wild comic sense mixed with the searingly dramatic.

Burney also wrote plays, which were mostly unstaged, because her father, the historian of music Charles Burney, felt that writing for the stage was inappropriate for a lady (gone were the days of Aphra Behn, though she probably doesn't count as the right kind of lady anyway). Burney did write several, both comedies and tragedies, which have been published in a two-volume set. I recall Professor Doody telling us about seeing one of the comedies, The Witlings, which apparently worked quite well on stage. I found the copy of the set below from a catalogue, now vanished as far as I can tell, called The Scholar's Bookshelf, which basically sold remaindered books from university presses. I loved that catalogue. 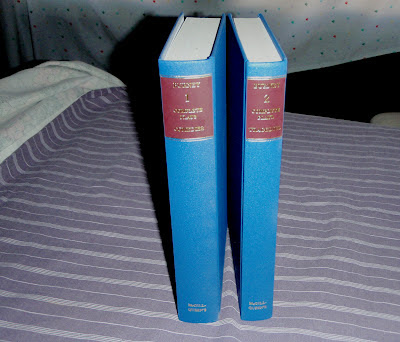 That catalogue is also where I bought my copy of the Burney biography eventually published by Professor Doody. (Note the name in the title: Burney is usually called Fanny, sometimes Frances by those who feel the diminutive undercuts her with a sort of coziness, and occasionally Mme D'Arblay, her married name. There's an almost Wagnerian thing going on with the names there! Interestingly, Cecilia pivots on the question of women's names; the eponymous character is left a fortune by her uncle with the stipulation that any husband she takes must take her name; this is a problem for the sort of old, proud English families who consider themselves entitles to heiresses.) 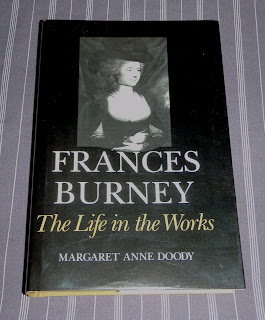 Throughout her long life (1752 - 1840) Burney was connected to many of the key figures and events of her time; early on she was befriended by Dr Johnson, she worked as Second Keeper of the Robes at the court of George III and became friends with Queen Charlotte, she married a French emigre general and was drawn into the political difficulties of the French Revolution and the Napoleonic Wars. And she kept a diary and wrote letters throughout it all. After her death these were often printed in excerpted or otherwise abridged form, but from 1972 to 1984 Oxford did publish a twelve-volume set, which was one of my prize purchases from The Scholar's Bookshelf. Except it wasn't quite a twelve-volume set: Volume 2, covering her courtship and marriage, was missing (this was made clear to potential purchasers in the catalogue; I never really understood why a set would be missing one volume, but there are lots of things I don't understand). 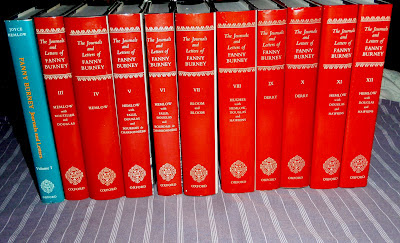 So for over twenty years I looked for a copy of Volume 2. I called Oxford University Press and was told the set was out of print (which would of course explain why The Scholar's Bookshelf had it). Whenever I went into a used bookstore, which was whenever I saw one, I would always check for the stray volume, because you never know: surely all those Volume 2s missing from those otherwise complete sets must have gone someplace? I even had fleeting thoughts of seeing if the libraries at UC Berkeley had a copy of Volume 2 and then photocopying the whole thing. I just couldn't start reading any of these volumes until I had all of them. I didn't even want to read the biography until I could follow it with the diaries and letters. Time passed and there were plenty of other things to be read, but in the back of my mind I kept hoping Volume 2 would show up. Once I discovered Amazon (and Alibris and other such sites), Volume 2 was one of the first things I checked for. But nothing turned up. It began to seem hopeless. Then one day a few months ago, realizing I hadn't searched Amazon for Volume 2 in quite a while, I decided to check again, more from habit and boredom than anything else: and there it was. I wasn't entirely sure it was the right book until it actually arrived from England a week or so later. Not only was it the long-missing volume, at last, but my total cost for the book and shipping was $7.87. Seriously. 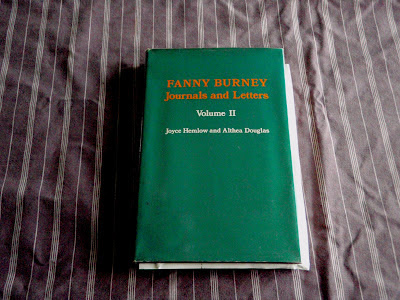 Once the book arrived I began a frantic search late on a Friday night for the box that held the other eleven volumes. I knew I had lugged it through various moves and finally stuck it in a closet to wait until the unforeseen day when the lost volume returned to the fold. Eventually I remembered which closet I had put it in, but not before some panicking when it wasn't in the first two places I looked. What I did find in the first place I looked (so I guess it's a good thing I hadn't put the books there) was a horrible swarming mass of ugly brown insects devouring all the cardboard boxes in that closet. I raced those boxes into the backyard and emptied and vacuumed the closet and called the next day to schedule a termite examination. 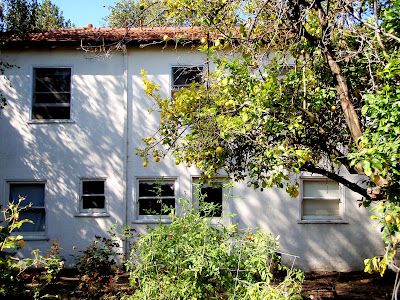 Luckily for me, the swarm had not caused any structural damage. But I had a horrifying thought of how far the nasty nibblers would have gone if I hadn't happened to check that very messy closet at that particular time. So that is the story of how the Internet united me with Frances Burney and saved my house from the terrible jaws of the termites.
Posted by Patrick J. Vaz at 9:30 PM

And you passed the love of Fanny Burney on to me. Thank you for that.

One of the most interesting things about her novels was her descriptions of musical performances. There seemed to be an awful lot going on that would make listening very difficult. The descriptions are pretty fascinating, and probably would be especially so to some of your readers.
V