Last weekend I had a double dose of the Zenshinza Theatre Company, who came to Berkeley on their American debut tour. Zenshinza describes itself as “Japan’s oldest and largest repertory theater company”; they were founded in 1931 by two famous kabuki actors, Kawarasaki Chojuro and Nakamura Kan’emon, after a 1928 kabuki tour of the Soviet Union. Ironically, this first kabuki tour outside of Japan, while hugely influential on western theater, left the Japanese actors wishing for a more realistic performance style. 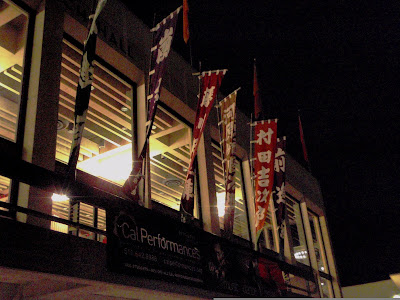 Saturday evening featured two works in classic kabuki style. The first, a comic curtain-raiser called Chatsubo (The Tea Chest), tells of a drunken servant carrying a chest of fine tea home to his master, a tea connoisseur. He falls asleep in the middle of the road with his arm through one strap of the chest; a clever and desperate thief comes by, sizes up the possibilities, and puts his arm through the other strap, claiming the chest is his. A magistrate comes by and quizzes the two, who mirror each others words and movements. It’s a fun little piece, expertly performed by Fujikawa Yanosuke as the servant, Nakajima Hiroyuki as the thief, and Masuki Hiroshi as the magistrate, though it’s not really the kind of thing that makes me laugh out loud. Instead I enjoyed it the way I enjoy silent movie comedies – not so much because they’re funny as because I admire their elegance and wit of movement and invention. This story of a disputed prize seemed like something Mack Sennett might have produced. The piece was first performed in Tokyo in 1921, and though it’s an adaptation (by Okamura Shiko) of a presumably older kyogen piece, I did idly wonder if there was some cross-influence to the short comedies Hollywood was producing then. They feed the same theatrical appetite, in their different styles. 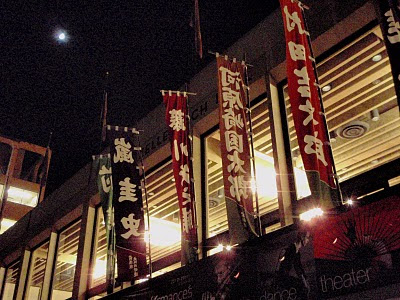 After the intermission came the evening’s main event, Narukami (The Thunder God). It is the tale of a powerful priest, Narukami (Arashi Keishi), who is angered by the Emperor’s refusal to dedicate a temple to him. He traps the rain dragons by his magic and the land suffers drought until, at the Emperor’s secret behest, Princess Taema (Kawarasaki Kunitaro), pretending to be a young widow intent on becoming a nun, seduces Narukami into drinking excessive amounts of sake, which priests are forbidden to drink at all. When he passes out, she cuts the magic rope trapping the rain dragons. Both dragons and Princess flee, and when Narukami awakes and realizes he’s been tricked, he in his fury changes with spectacular visual effects into a thunder god and vows to pursue the Princess, seeking revenge.
The bold and colorful sets and costumes of both plays were a pleasure to watch. It’s also a pleasure to watch a theatrical style that has been, as far as I know, basically unchanged for centuries (although of course the bedrock of English-speaking theater is much older – Shakespeare died about a century and a half before even the oldest kabuki plays were written – the English performance style has changed constantly). 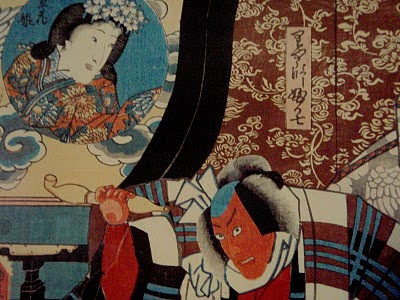 I was in the second row for this night, which was fine with me despite the neck-craning necessary to read the surtitles, but I saw some other front-row habitués move farther back at the intermission. That might actually have been a good idea for this second play, which uses the whole stage, often to significant purpose (for example, the way the Princess, who enters from stage right, and the priest over on stage left slowly move towards each other and the center of the stage as they move closer emotionally during the seduction scene). Since this is kabuki of course the Princess is played by a man; initially his stylized falsetto caused a few giggles but anyone who wasn’t expecting that sound or thought it was meant to be comic caught on quickly. Quite a spectacular show.
We had a spectacular of a different sort the next afternoon. Though I knew that Honen and Shinran was a new play (written by Tajima Sakae to commemorate the 800th anniversary of Honen Shonin and the 750th anniversary of Shinran Shonin, two monks who developed what became the largest Buddhist sect in Japan today), I thought it would be a new play in the kabuki style. 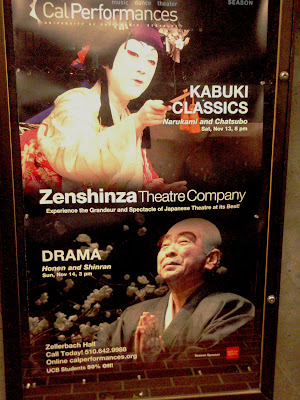 But the incidental music sounded like bits from a 1950s Biblical epic (pre-recorded for this play, though we had live music in the traditional style for the Saturday night performances). And there were actresses playing the female parts. So, no kabuki style! Instead it was a fairly old-fashioned religious pageant. Although I wasn’t familiar with the titular monks beforehand, the general arc of the story is familiar from any number of western saints and sages – from Jesus himself to Francis of Assisi and Martin Luther to the Ba’al Shem Tov: a holy man seeks enlightenment, and finally finds it not in the rules of established religion but in simple things of the spirit. He preaches and gives hope to the poor and dispossessed, offering them a direct route to the spiritual, bypassing the established priests and their complex and lucrative rules; eventually he is persecuted by the priests who are threatened by his message of spiritual equality and by the governors who are threatened by the spiritual message’s implicit message of political equality. 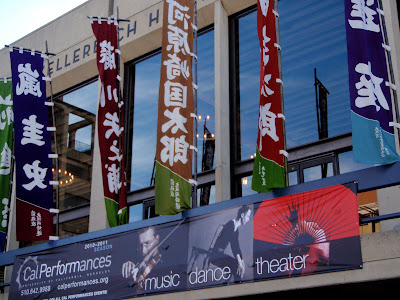 Though I probably would not have bought a ticket if I’d known exactly what the play was (or, more precisely, that it wasn't in traditional Japanese style), I don’t regret seeing it, though at three hours it struck me as too long. (Saturday night’s two plays were altogether about two-and-a-half hours, including intermission.) Perhaps I was just particularly impatient, having been stressed and fairly sick the whole week. On the other hand, the spiritual message of resilience and strength in the face of humiliation and rejection did resonate strongly under those circumstances, as did the realization that we’ve cycled through this particular story many times, not that we’ve ever learned much from it.
Certainly the audience was with them all the way. At one point a curtain jammed and there was a delay while they tried to get it to rise (the whole thing was quite fluidly and cinematically staged). This is normally the type of thing that reduces audiences to excited whispers and chuckles that last long after the problem has been fixed, but instead there was a respectful and reasonable silence. During a blizzard that opened the second part, the theatrical snow (little squares of white tissue paper) fell so abundantly that those of us in the front were well dusted with it. I noticed the woman next to me carefully pick the snow-scraps off her outfit and place the little pile in her purse as a souvenir. Afterwards she said to me, “Well, we got snowed on! That was something special.”
Posted by Patrick J. Vaz at 6:55 PM