My main reason for going to Philadelphia last June was to see Britten’s Rape of Lucretia, which the Opera Company of Philadelphia performed in the Perelman Theater, a beautifully suitable small theater in the Kimmel Center, next to Verizon Hall where the Philadelphia Orchestra plays. Last time I was in Philly, to see The Pearl Fishers, it was performed in the Academy of Music, so this was my first time in the Perelman, which is perfect for an intimate and intense chamber opera like this one. I’m not sure there’s an equivalent theater in the Bay Area. Too bad I had to fly across the country for my two best operatic experiences this year (this one and From the House of the Dead at the Met).

The story of Lucretia is one that lends itself to the emblematic. It’s both formal and deeply emotional. A good example is the end of the first act, when Tarquinius (Nathan Gunn) bids good night to Lucretia (Tamara Mumford) and her ladies Bianca (Allison Sanders) and Lucia (Rinnat Moriah). The ladies are lined up, and he says “Good night” to each of them, and each responds, “Good night.” It’s all very formal and ceremonious, and a simple moment, but thanks to Britten’s music, one freighted with anxiety and foreboding. 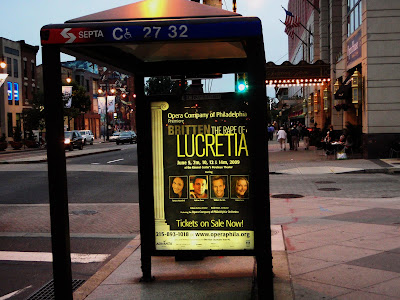 The libretto by Ronald Duncan puts the story within a Christian context, as the Male Chorus (William Burden) and the Female Chorus (Karen Jesse) comment on the unfolding events from the viewpoint of a Christianity that didn’t exist in Lucretia's world. This somewhat puzzling double-framing ironically increases the dramatic tension, since the problem arises of connecting the parts. My feeling is this: both the Christian love and compassion expressed by the Choruses and Lucretia’s sense of honor and love are attempts to live the good life, that is, a life guided by a sense of the virtues, a life your conscience can look back on with satisfaction. This impulse regularly and often tragically can run up against the usual definition of the good life, a life guided by emotion and sensation.

For Europeans and their descendants, Christianity and the classical world are the two major paths in their history. Both offer the possibility of morally good lives, but attempts to live that life in either philosophy often smash into the nature of the world and of people, so both try to offer some consolation to the grieving. The rape and subsequent suicide of Lucretia led to the overthrow of Rome’s tyrant kings and the establishment of the Republic. Christianity assures us that suffering in this world is replaced by joy in the next, and that sin and evil ultimately and in spite of themselves produce their own defeat, also in the long run. The problem is that we don’t live in the long run, and in the face of immediate pain and suffering the promise of future happiness can seem empty or even cruel. This is true of both philosophies and it's what joins them: the challenge of getting us to accept their ultimately optimistic views in the face of the needless suffering we have just watched people inflict on each other.

I think the only serious though minor mis-step in this production was dressing the Male Chorus as a sort of TV preacher, complete with fish cufflinks (the Female Chorus was more in general choir-director garb). TV preachers offer a parody and perversion of Christianity, and the opera attempts to deal with Christianity in a serious way. There also seemed to be some emphasis on a male/female divide as well as a Christian/classical divide, at least judging from the way the Female Chorus would at times glare (sometimes to unintentionally comic effect) at the Male Chorus as he went on. Other than those quibbles, this was a beautifully done production, very simple but with any necessary effects nicely done, like the flowers Lucretia scatters before her suicide.

This opera should be seen by anyone who feels that Britten’s obsessive theme of the corruption of innocence is just a fancy version of his longing for youths (on a linguistic sidenote, it’s interesting that “youths” always means “male youths”). Here it is a wife who represents threatened goodness. So Tarquinius was an interesting role for Gunn, famous for his Billy Budd – this time, he’s essentially playing John Claggart, only Tarquinius is given the complexity that the operatic Claggart could have used more of. Gunn captured the self-loathing as well as the pride of the prince’s privileged and useless son. There’s a streak in him of that feeling captured in the line from Fight Club: I wanted to destroy something beautiful.

The whole ensemble was outstanding (to complete the cast: Ben Wager was Collatinus and Eric Dubin was Junius). I saw it twice and would happily have seen it again. I find that the operas and the productions that I can watch over and over are the ones that give you something to think about once the immediate emotional immersion has passed. Too bad we don’t get as many opera DVDs from American companies (outside of the Met) as we seem to from European companies: this was one to watch over and over.
Posted by Patrick J. Vaz at 7:29 PM

Yeah, I was really impressed with him, though you couldn't tell it from this entry, which is my fault, not his. The whole ensemble was just at an incredibly high level, and the performances were getting more intense with each show, judging from the ones I saw.