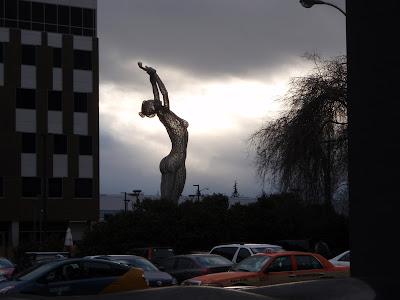 (Truth Is Beauty, sculpture by Marco Cochrane)
Posted by Patrick J. Vaz at 6:00 AM

Nice pic. I can see why some of the San Leandro locals were protesting its very public placement, because it looks like a bald enticement to rapturous public sex.

Thanks. If any rapturous public sex takes place, I'll go over with my camera.

I think the "protests" were greatly exaggerated, but as part of the obligatory narrative they had to drum some up. (I think "they" is mostly the local media, but maybe others eager to defend art also wanted some opposition that they could in turn oppose.) I see lots of people taking photos of the statue as they leave the station and the comments I hear are generally favorable. I have heard of no attempts to remove the statue or have her decently draped a la Michelangelo's Last Judgment. I have to say I like it more than I thought I would: the early photos we saw made it look more kitschy than it is, and "originally made for Burning Man" is not a recommendation as far as I'm concerned. But it's settling in to be a local landmark.

I'm actually a fan of "originally made for Burning Man" sculptures. There have been a number of big OMFBMs in my Hayes Valley neighborhood over the years and most of them have been wonderful.

Good to know, and thanks for the corrective opinion -- my statement was based on prejudice and not any reality-based judgment.

That is gorgeous. It looks like a drive-in movie scene.

Thanks! Not a reaction I would have guessed, but I love it.