the writing on the wall

The Asian Art Museum currently has an exhibit of Chinese calligraphy I had been looking forward to. It's the sort of show that would repay close attention and frequent visits, which is exactly what it's not going to get from me, because the museum has once again curtailed its Thursday night late hours. Those are easily the best viewing hours for working people; without them I'd have to make a special trip in to San Francisco on a weekend, and my weekends are already packed, as is the museum on weekends. 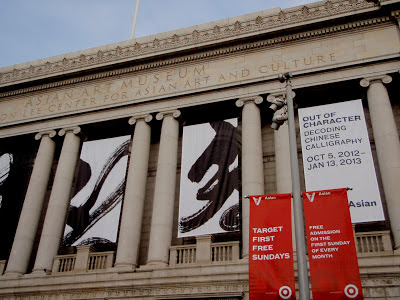 It seems to me that in previous years it was only during November and December that the museum didn't have Thursday late hours. This year it's October as well. I had always figured Thursday concerts in Civic Center would work for me because I could go to the museum beforehand and not feel that the hours after work were being completely wasted by the local insistence on outmoded 8:00 start times during the work week. But now the museum has removed that justification by shutting down for all practical working-stiff purposes for three of the prime concert-going months. And during the rest of the year the museum frequently ruins the late-hours experience with stupid obnoxious parties (see here and here) or boots out members for the convenience of various corporations and their events.

I had planned to go to the museum before a Thursday night concert the first week of October. Something made me check the website that afternoon, but for reasons I don't remember (maybe contradictory information, or maybe just habitual caution and mistrust) I ended up phoning to check on the hours. I kept getting recordings that didn't tell me anything I needed to know, so I ended up calling the gift shop, the only number I could find likely to be answered by a human being. A very nice woman there told me that the museum was indeed now closed Thursday nights for three months starting in October but would be open late just that one day for a special event although members would be allowed in. I didn't think to ask if the Cafe would also be open. It wasn't, except for a few prepackaged and fairly sad-looking sandwiches and salads. Normally the Cafe is very appealing, so this was a disappointment. I was on my way to a concert at Herbst Theater, did some rapid logistical calculations, and realized I'd better go find a place to eat instead of contemplating calligraphy. So I had about a fifteen-minute walk-through of the exhibit, and instead of waxing rhapsodic about it here I will instead wonder why the Asian Art Museum is so bent on inconveniencing patrons, especially those who work. If the museum is that short of money, why not shut down another day during the week and keep the late hours to accommodate those who can most conveniently visit then?.Why not reach out to concert-goers at the Opera House, Symphony Hall, and Herbst, and sell themselves as a pre-concert destination? This seems like a case of facing difficulties by retreating into what is already not working that well. Times of crisis should be times of innovation, people!

I have to work to support myself, but I also have a foolish need to experience art. Adding to my irritation at the museum is my general dislike of being made to feel like Jude the Obscure.

At the concert I ran into a friend and I mentioned I was about ready to drop my membership in the Asian Art Museum, since their curtailed hours and stupid parties were making it increasingly useless to me. He told me if I did that I should at least donate money to support them. (My membership is pretty much turning into a straight donation anyway since I'm getting less and less use out of it.) I said I didn't really see the point of that. My limited funds can go elsewhere. Then I asked him if he had a membership or donated money to the museum himself. "Oh, no," he replied. 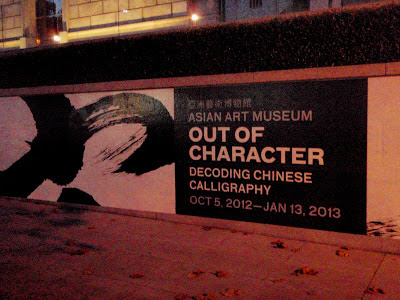 Finally appreciated the calligraphy show. You need to sit in the central room looking at the huge wall of tightly controlled calligraphy from the 15th century, and then wander around realizing that everything else is a stylized, poetic riff on this particular rigid classic, which was actually a revolutionary revival of an outmoded style from 1500 years earlier.

The "explanatory text" doesn't really explain much of anything, another example of the museum's lapses of cluelessness, some of which you've identified.

If you do go to the calligraphy show, be sure to join one of the Chinese language docent tours. It's incomprehensible (unless you speak Mandarin) but much more interesting than the English versions.