I think my intense focus on the Stein collection at SFMOMA was the reason it took me a while to realize there were a couple of fantastic exhibits up at the Legion of Honor: Dutch and Flemish Masterworks from the Rose-Marie and Eijk van Otterloo Collection and The Mourners: Tomb Sculptures from the Court of Burgundy (I had also seen the Mourners in Minneapolis last spring). It's a lengthy trip by BART and bus from my house to the Legion of Honor, way up on the tip of something on the San Francisco peninsula; and whether you take the 38 Geary or the 1 California your bus ride is pretty much guaranteed to be long and grueling. Stepping off the bus and walking up the usually mist-shrouded hill that leads to the museum is like stepping into another dimension of an alternate world, which is really fortunate if you have much experience of either the 38 Geary or the 1 California. 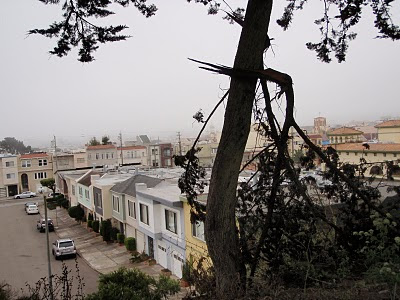 It had been foggy in the East Bay but I was kind of surprised that the fog was heavy enough around the Legion so that the occasional fat heavy water drop splashed on me as I walked under the trees. I think the wetness and the cool silver-gray tones set the stage quite well for the Dutch paintings, many of which feature olive-silvery seascapes or winter landscapes that might look bleak except for the apricot-pinkish blush in the back of the sky and the little touches of dark red in various scarves and jackets and brick buildings in the front. 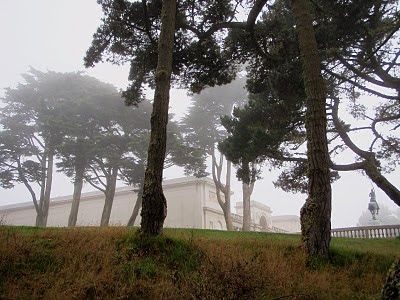 The van Otterloos have put together a really stunning collection, with beautiful examples of the major genres (including seascapes, still lifes, flowers, portraits, landscapes, anecdotal, and historical/allegorical pictures) and artists (up to and including Frans Hals and Rembrandt, who are both represented by mesmerizing portraits) of the Dutch seventeenth-century "Golden Age." As in the Frick Collection, it's all of recognizably high quality, even if it's a genre you don't particularly care for: Frick liked the marzipan nudes of the French rococco much more than I do; in this collection, the only thing I didn't really like was the anecdotal painting showing a cheerful chubby girl in a tavern holding her finger to her lips to us, requesting our complicit silence over the centuries, as she picks the pocket of a sleeping traveler.

I always wonder how the sturdy Dutch bourgeoisie reacted to such scenes: did they take them as warnings of what could happen when you fell into the wrong hands through carelessness or drunkenness (just as warnings of death and decay are built into their early still lifes, which can look to us merely like sumptuous display), or did they resist bourgeois propriety by feeling amused and delighted at the trick the servant girl is playing? I always imagine myself as the victim of such mischief, which is why I can admire the composition and line and color and find the subject matter not only a bit kitschy but sort of hypocritical -- anyone who had such a painting would be in the social position of the traveler being robbed, not the servant girl. 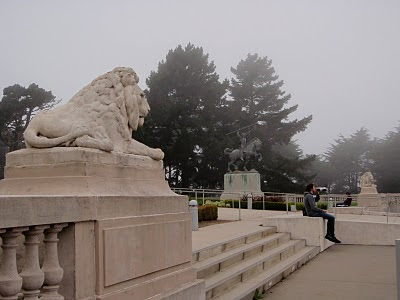 Nonetheless I saw a chubby cheerful woman chuckling in front of the picture. She looked as if she might have been the sister of the thieving maidservant, though no doubt she was more respectable. I do wonder if she genuinely found the picture funny enough to make her laugh out loud. Who knows.

Speaking of the income of the likely buyers of these original paintings, one placard did inform us that pictures showing vases of extravagant flowers were popular because they were less expensive and longer-lasting than cut flowers, which reminded me of those foods that are staples for the poor that become scarce and turn into luxury items. I have the impression (maybe I need to revisit that Simon Schama book) that ordinary middle-class people of the time could afford to buy paintings. Too bad our republic isn't more like theirs.

I couldn't take photographs since it was a special exhibit, and as usual most of the postcards available were not of the pictures I wanted, except for the Winter Landscape near a Village by Hendrick Avercamp, which reminded me of some of Pieter Brueghel's winter scenes. There was a particularly beautiful still life featuring oysters and candied fruit, and a delightful scene of animals charmed by the singing of Orpheus, which featured two magnificent leopards in the foreground and the splash of a brilliant red macaw back in the trees; amusingly, the domestic animals -- cats, dogs, chickens -- were closest to Orpheus, and the wilder animals, perhaps through force of wary habit, were dotted through the rest of the landscape. 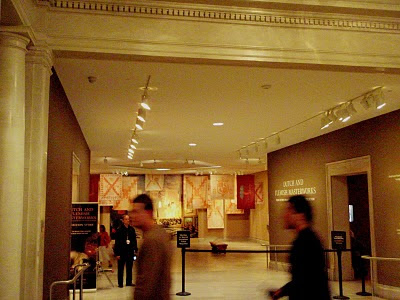 This is a really wonderful show, and well worth the effort to get to the Legion of Honor. It was very generous of the van Otterloos to share their collection with the rest of us; if I had these beauties hanging on my walls, I don't know if I'd expose them to the jabbing fingers of the public. Seriously, what is wrong with people? Why do they have the need to stick their grubby fingers right up to the paintings? Of course if the guards say anything it would only encourage these clueless and entitled (maybe those are the same thing) people to continue, due to the basic immaturity of people, which maybe answers my earlier question about the appeal of the anecdotal paintings.

Anyway, sadly for us this show closes on October 2. Catch it if you can. 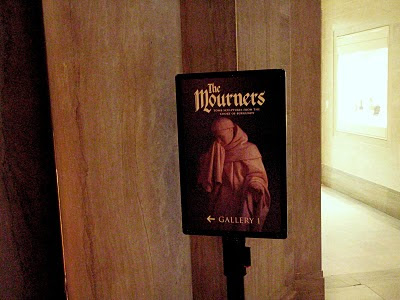 You do, however, have through the end of the year to view the Burgundian statues, the 37 perpetual mourners currently touring the world while their usual home, the tomb of John the Fearless, second Duke of Burgundy, is being restored.

In Minneapolis the statues were displayed in a long double file down the middle of a long hall featuring medieval art; here they are put in two rooms, with some of the mourners clustered together in the center of the room and some individual ones in vitrines in different corners. The rooms are painted a very deep blue, which shows off the alabaster nicely. Both methods of display are effective; one gives you a sense of the whole processional and the other maybe allows for the statues to stand out more as individuals. 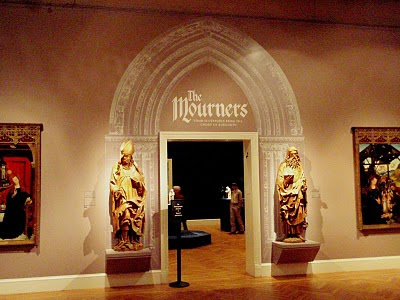 The statues are done with such sculptural mastery and display such psychological penetration that it's easy almost to take them for granted, as if such perfection were merely natural and not the result of rare artistry.
Posted by Patrick J. Vaz at 5:07 PM