One advantage of Thursday night concerts in Civic Center is that (depending on the time of year) the Asian Art Museum is open late. About once a month they have some sort of irritating event with loud bad music and crowds milling around drinking and other things I try to avoid. But if you go on a regular Thursday night, it's ideal. 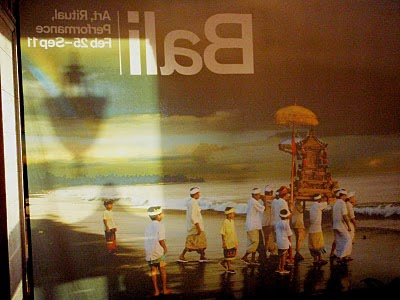 The museum's holdings are much larger than its building, so the permanent exhibits are not so permanent and change often. There are also special exhibits; the current one is Bali: Art, Ritual, Performance. 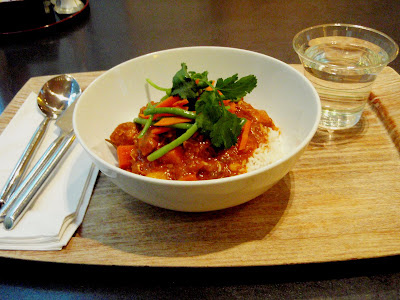 There is also a handy restaurant. Above is the pork stew, with decorative coriander. 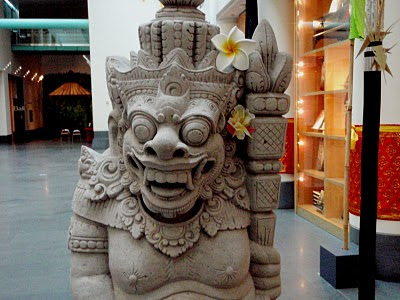 Photography is not allowed in the special exhibits, which seems to be a universal museum rule, so all of the pictures here are from the lobby, the gift shop, or the permanent collection. 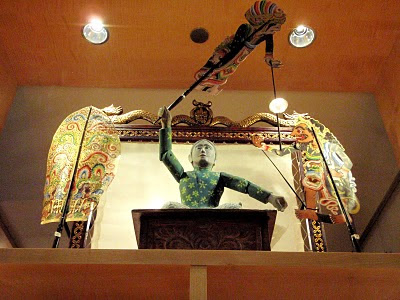 As is true of many African cultures, until the twentieth century these elaborate and beautiful works were created for use in rituals, sacred and social, rather than as stand-alone art objects. There are several fascinating videos built into the exhibit, showing dances, shadow puppet shows, and even cremations, which take place in animal-shaped coffins under elaborate palanquins, which are then set aflame. Unfortunately the video I saw did some editing on the actual burning, so you couldn't watch the whole progress of the fire, which I have always found maybe too fascinating. 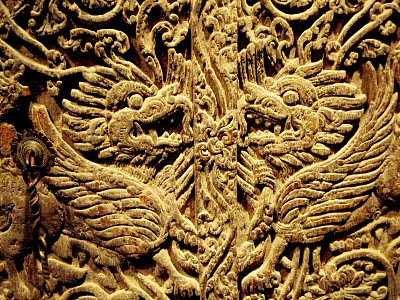 The other main point of the exhibit is how the Dutch, after violently colonizing Bali, then promoted its image as an island paradise. Nothing like palm trees and bare-breasted women to make you forget the sordid economics of exploitation.
The art of Bali has been very influential, particularly on musicians; gamelan has fascinated and inspired composers from Debussy and Britten to Lou Harrison. The fascination with Bali has itself become an object of study and fascination; Evan Ziporyn recently wrote an opera called A House in Bali exploring the sojourns there of Colin McPhee, Walter Spies, and Margaret Mead (I wrote about the opera here). 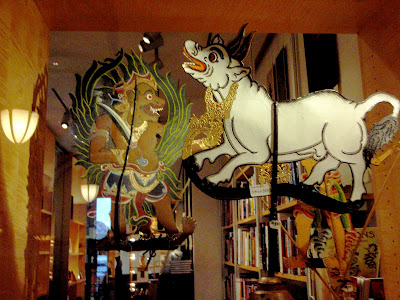 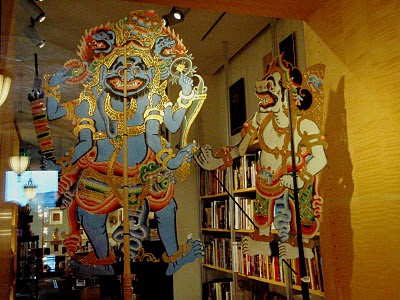 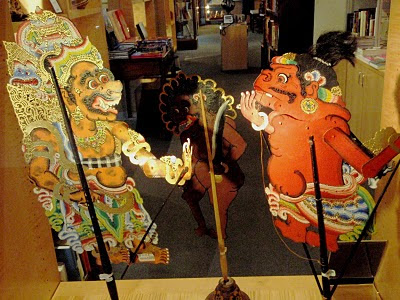 Well, Bali: what's not to love? gamelan, ancient dances, shadow puppets! The three pictures of fabulous shadow puppets above, by the way, are from the gift shop, which means you could walk out of the exhibit with your own work of art. I love how they are elaborately colored, even though they are used mostly to create shadows. I was very tempted to buy one, but I was on my way to Leila Josefowicz's recital at Herbst Theater and it didn't seem like a good idea to carry a delicate and elaborate paper puppet through the rain to a concert and then home on BART. The exhibit runs until September 11, so I guess I have time for puppet-purchases under more auspicious circumstances.
This was my first time hearing Josefowicz. She was in recital with pianist John Novacek. It was very enjoyable, once I adjusted my expectations. Josefowicz is a MacArthur fellow, primarily for her advocacy of new music, so I was expecting something wilder than we got: there were five composers, and four of them were from the pantheon (Brahms, Shostakovich, Stravinsky, and Schubert), with Estonian Erkki-Sven Tuur (there should be an umlaut over each of those u’s) as the only contemporary. His piece, Conversio, was very attractive, sort of a minimalist hoe-down that ends in icy shrieks. Josefowicz is an astonishing virtuoso who can summon up all sorts of sounds, but (here comes the other expectation I had to adjust) warmth and lyricism were missing, at least in this recital. I don’t know if she felt the program simply didn’t call for them, or if the program was chosen specifically because it didn’t call for them. The playing was dazzling, like sun on a glacier, but I felt we were in a fairly restricted emotional world.

I would definitely go hear her again, but I just didn’t have that “oh, wow, she can do anything!” reaction I had when I first heard Hilary Hahn or Jennifer Koh live. It was the Stravinsky, of all things, that came the closest to an emotional connection; the Eclogues in the Due Concertant went to the heart. Novacek was a hard-driving accompanist. The first half was the Brahms Scherzo in C minor for Violin and Piano and the Shostakovich Sonata for Violin and Piano, Opus 134. After the intermission came the Stravinsky, the Tuur, and Schubert’s Rondo brilliant in B minor for Violin and Piano, D. 895. The encore was, of all delightfully unexpected things, Charlie Chaplin’s Smile (I didn’t catch the name of the person who did the arrangement – Haussman? – and I don’t see it listed on the San Francisco Performances site). The familiar song was not only free of schmaltz, it was oddly free of sentiment – like a pure unworldly shaft of icy light. I would never have guessed it could sound that way, but it was very refreshing and beautiful.
Posted by Patrick J. Vaz at 11:36 AM